Discussion about an ongoing work.

Experimentation about a method for online learning and controlling system with uncertainty.
The aim of this work is to take advantage of smart exploration algorithms in order to more efficiently build a control policy based on the Quasimetric method.
For details about the Quasimetric method see http://www.plosone.org/article/info%3Adoi%2F10.1371%2Fjournal.pone.0083411

The problem here is to control an (uncertain) dynamical system modelled as a Markovian Decision Process (MDP) with the transition probability P(X^{t+1}|X^{t},U^{t}), with X the state and U the action.
To do so we use the Quasimetric method on which we added learning capabilities, i.e. learning P(X^{t+1}|X^{t},U^{t}) with a Laplace succession law (ask if you want more details).
This method allows us to compute a policy P(U|X) for reach a given goal.
The problem is that initially the dynamical model contains no information and the policy is uniform, thus random.

Here we are interested in finding an efficient way to explore the state space in order to learn the model and thus the control policy.

In the test procedure we start without any knowledge (uniform probabilities) and the aim is to simultaneously explore and construct a model and a Quasimetric. Then, the Quasimetric can be used to compute a policy to reach a chosen goal.

An experiment epoch is done by simulating the pendulum for a maximum of 300 timesteps (until the goal is reached), starting from the low equilibrium position. Depending on the tested method (random motor, random goal or discrete progress), for each epoch the policy is respectively random, based on a randomly chosen goal or based on a discrete progress tracking chosen goal.

Then for each chosen goal a policy is computed based on the current model and Quasimetric. A complete run is composed of 10000 successive epochs.

Here are examples of obtained policies toward a specific goal (the vertical unstable equilibrium) for each method after 10000 epochs compared with the optimal policy (computed with Value Iteration). 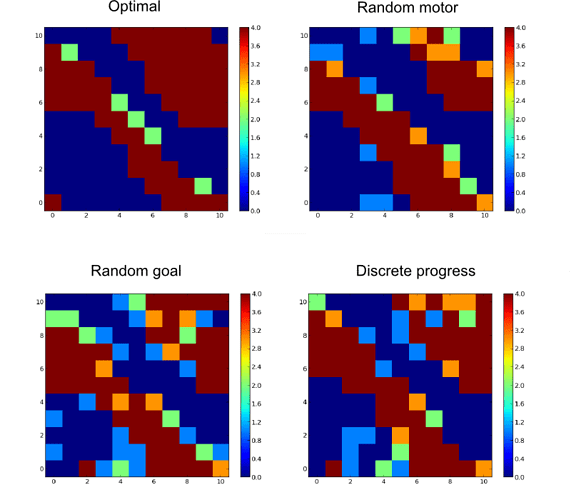 Angular position in x and angular velocity in y (vertical equilibrium position with zero velocity in the center). Color code represents the action (most probable action).

If we look at the evolution of these policies through iteration (square error compared to the optimal) we can see a slight improvement after a while, using the Discrete Progress: 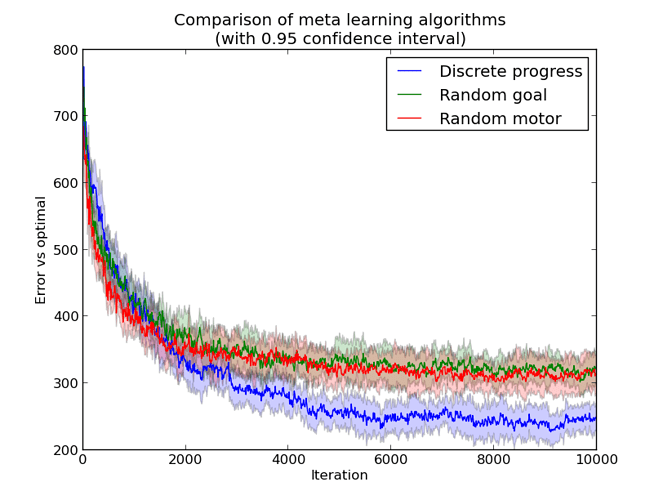 In fact, as expected, if we look at the chosen goals for the Discrete Progress method (compared to random goal) we can see that the “easy” part of the state space if less explored than the “difficult” one:

It is not clear if one method is really better than another at improving the overall learning performance.
How to evaluate/compare the different exploration methods?
The error to the optimal is maybe not a good metric.
We tested the time to reach a goal and no clear differences appeared.